Yes You Can Study the Bible Pt2

Through by Sabrina Calhoun 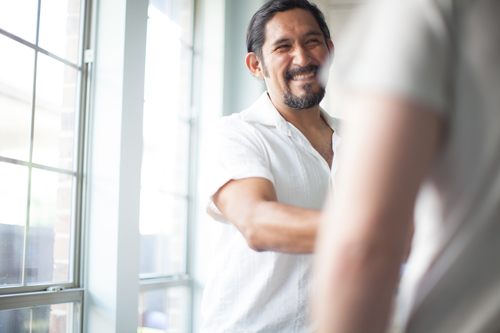 This week, I had the pleasure of leading a 3-day workshop for my division. Like the Avengers, we assembled a team of talented, passionate people to tackle some serious issues that had come up because of the pandemic. One of the members was a last-minute addition because he was moving into a new role within the company to support this kind of work. Everything I had ever heard about this guy was negative: lazy, unmotivated, complainer, untrustworthy, etc., etc., etc. As a person that prides himself in forming my own opinion on people, I said to myself, “I’m going to surround this guy with encouragement, positivity and treat him like he’s a highly valued member of this team. Lord, help me break this thing over him, starting today.”

Over the course of 3 days, these were my words to him:

“It’s a pleasure to meet you. Congrats on your new position. You’re going to be awesome in this new role.”

“You see how good she is at what she does. That’s going to be you very soon.”

“You sounded great on that report out. Very calm, no stuttering, you have a gift for this.”

“Don’t ever be intimated by anyone in this room, be inspired by them because we are all technically servants. All this work is for the patients we serve, and I wholeheartedly believe that to be the greatest person in the room …you have to be the greatest servant.”

After that last statement, his eyes opened wide, and he said, “Ohhhh, you know The Lord!”

After the 3-day workshop, I told his boss that he had done a fantastic job learning the new role on the fly and that she had made a great choice hiring him. She said, “Thank you for that feedback. He was raving about his experience with you and your team also.”

“Therefore, if anyone is in Christ, he is a new creation; old things have passed away; behold, all things have become new.”

“Let no corrupt word proceed out of your mouth, but what is good for necessary edification, that it may impart grace to the hearers.”

“But he who is greatest among you shall be your servant.”