The Abstract Art of Love by Helen Ivicevich, Part One

How Rich Was Jesus

The Abstract Art of Love by Helen Ivicevich, Part Two 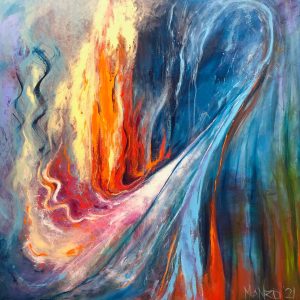 Who is God? What is He like? How can I see Him? Ageless questions spoke by men throughout time. Can we see Him? Can we know Him? Yes, God has always had a plan. Every man has been given the measure of faith, in whom and where they invest it is inherently in their free will. To put it in contemporary language, He left a chip on the inside so He can track you! Spooky! Then again, the enemy can only counterfeit what God has already done.

Many years ago, I became interested in neurology, and I wanted to understand a scientific way to explain renewing your mind with the Word of God. I read all 400 pages of the book “The Telomere Effect” written by Elizabeth Blackburn, PDH. She won the Nobel Prize for her scientific discovery of the telomere. I have often read entire books to find one truth that changed my life. In this book, I learned that unless you can measure something, you cannot prove it exists. Why did God give man the measure of faith? With a mustard seed measure of faith, God is able to prove our existence and give us a way to communicate with Him. Amazingly, the measure of faith was in the bible long before science defined existence as the ability to be measured.

In Genesis, you hear God calling out to Adam, “Where are you?” At that moment, I believe Adam called out too, “Where are you?” Although the glory had departed from man, within him remained a mustard seed of faith. A measure sufficient for God to talk to His creation and hear His answer, “Here I am!” The bible is the story of God’s answer to man. From the “hesed” covenant love in Hebrew to the “agape” God kind of love in Greek, God never stopped talking.

In the Old Testament, God described Himself in types and shadows, a type of realism, the art of showing their subject in almost a photographic way, an image to which we can relate. “I am a strong tower; I am a burning bush, I am the rock that slew Goliath, I am the dry ground beneath the parted sea, I am the lamb that was slain from before the foundation of the world, I am the manna from heaven,” to name just a few. Word pictures to illustrate His character and communicate His love.

Recently here in Perth, West Australia, we had a once-in-a-lifetime solar experience. Visible to the naked eye, we saw Jupiter, Saturn, Venus, and the Moon line up on full display. The sky was deep blue, cloudless, and still. The majesty of it was breathtaking, causing a spontaneous adoration of God’s creation. With the world in such a mindset of lockdown, for a moment, I was soaring, weightless in His Majesty, and completely enveloped in His Love. He showed Himself to me, “Here I am.”

The very first covenant name of Our Saviour is found in Genesis 3, the seed of the woman. This would become a new covenant that would not only allow the anointing to come upon man but also ignite the seed of faith with the infilling of the Holy Spirit. God would live inside of man again. Now the voice of God crying out, “Here I am” in our world would be speaking in our hearts, “I am love, I am life, and I am light.”

We celebrate the arrival of God’s perfect plan every year; we call it Christmas. Although the date is inaccurate, the celebration is timeless and worthy of remembrance because His mercies are new every morning.

On the blank canvas of humanity, God painted a perfect picture of Himself and his name was Jesus. Love became a man and walked amongst us. A man with the spirit “in Him” as well as “upon Him”, a type and shadow of who we could become. If you do not know Him, quietly ask, “Where are you?” and Jesus will answer, “Follow me, for if you have seen me, you have seen the Father because as He is so am I in this world.” The night I was born again, I heard God speak to me, “I love you just the way you are.” I answered, “No one loves me the way I am, but if you like me, I like you.” If you like me is not found in any evangelist formula, but it was enough for Him to say, “Here I am.”

That day, I became a love addict, still an addictive personality, but there is no high like the most high. I am going to reveal something here that I have never shared with anyone. Everything I do in this ministry has one foundational truth, it never varies and never diminishes. The day after I was saved, I started reading the New Testament, which I did without sleep for three days. Remember, I am an addict, 1 Corinthians 16:15 (KJV) says that they have addicted themselves to the ministry of the saints, so yes, it is biblical! Halfway through the second time, Jesus interrupted me, saying, “Read it as though you are in my shoes.” This changed me forever; it is the passion with which I read the bible and empowers me to walk in love. Always and everything, IN HIS SHOES.

To be continued in Part Two….

Helen Ivicevich is an Evangelist called to minister to the nation of Australia. Helen began using recreational drugs as a young teenager, joined the Hell’s Angels, and suffered a horrible attack. Then she encountered the Lord and His Word. Healing began to flow into Helen’s life. She has been preaching in Australia since 1983.